I gave a belated 100th birthday piano concert in honor of Frank Sinatra – only a few days late, my regular Brookdale Senior Living home monthly performance, ironically on my own birthday.  I listened to Sinatra all day on Dec. 12, his 100th and I wondered how different my life would have been if there had not been a Frank Sinatra.  He permeated our culture. 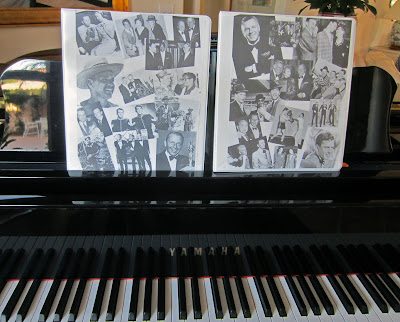 The Great American Songbook would not exist in its present form if there was no Sinatra.  I remember in high school I was just getting over my fascination with Elvis Presley, and abandoning my guitar lessons, when a new kid moved into my neighborhood. Ed was unlike any of my other friends. When we hung out in his room he had two albums he played over and over again, Frank Sinatra’s Come Fly With Me, and Ahmad Jamal’s At the Pershing: But Not for Me, both released in 1958 on the eve of my senior HS year.  My parents never listened to such music. Those albums brought me back to the piano.

So, thanks to that accidental connection, and Frank and Ahmad, I’ve had a musical life of joy playing the songs of the Great American Songbook during my entire adult life.  And I’ve had all those decades of enjoying Sinatra but it wasn’t until he was in his mid-70’s, the age I’m now approaching myself, that I had an opportunity to see him in person.  It was June of 1991 and we had ventured to Las Vegas for a long weekend to see our dear friend, Peter and his wife Marge, who lived there.

Peter had been diagnosed with cancer but he was still mobile and relatively pain free and our mutual wish was to see Sinatra who was then appearing at the Riviera Hotel.  We had practically front row seats, slightly off to the left, and he sang many of his signature pieces, some of the same ones I played at my concert such as The Lady Is a Tramp, I’ve Got you Under My Skin, New York, New York and the piece I concluded my own piano tribute to him, My Way. That June 1991 appearance turned out to be among his last concerts in Vegas.  His orchestra was enthusiastically conducted by his son, Frank Sinatra Jr.

Although one could tell that age had taken its toll on Sinatra’s voice by then, his phrasing, which made him so distinctive, as well as his personality, came through.  He had the ability to convince the audience members that he was singing directly to and for you.

I had one tangential connection with The Chairman of the Board.  In 1998 my publishing company published Ol’ Blue Eyes; A Frank Sinatra Encyclopedia, chronicling every song he ever sang, every movie he ever appeared in.  I gave a copy to a transient boater who was docked next to me at our marina as he was Sinatra’s drummer for many of his concerts over a twenty year period (forgot his name).  So I was regaled about several personal incidents and it was enjoyable to hear from someone who worked closely with him.  Bottom line, Sinatra was a perfectionist when it came to music and how he sang a song.

He was also an outspoken person all his life.  I found his 1963 Playboy interview fascinating.  Then, of course, the threat was communism and the cold war.  I’m pretty sure if he were around today, he’d have a thing or two to say about the present world tumult and the breakdown of our political process.
Posted by Bob at 12:13 PM