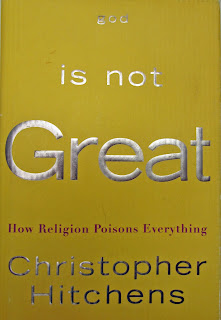 It’s a masterpiece of logic and freethought: God is Not Great; How Religion Poisons Everything.  In the small world department, it’s dedicated to his close friend and one of my favorite contemporary English novelists, Ian McEwan, with whom he no doubt extensively discussed the book’s contents as it was being written.

I’ve never forgotten Cal Thomas’ reprehensible “Christmas message” extolling the death of the atheist Hitchens who died of esophageal cancer more than three years ago. As a secularist, I’m predisposed to Hitchens’ arguments, but as I’ve only read some of his essays in the past; it was time to read the book which Thomas castigates. While Hitchens carefully builds his arguments free from external dogma, Thomas uses the bible as his reference source.  As I said at the time Thomas published his piece, Hitchens would have annihilated him in a public debate.
Hitchens’ book begins with two brilliant introductory chapters.  The first, “Putting it Mildly,” sets out his fundamental arguments: How much vanity must be concealed – not too effectively at that – in order to pretend that one is the personal object of a divine plan?  How much self-respect must be sacrificed in order that one may squirm continually in an awareness of one’s own sin?  How much needless assumptions must be made, and how much contortion is required, to receive every new insight of science and manipulate it so as to ‘fit’ with the revealed words of ancient man-made deities? How many saints and miracles and councils of conclaves are required in order to first be able to establish a dogma and then – after infinite pain and loss and absurdity and cruelty – to be forced to rescind one of those dogmas?  God did not create man in his own image.  Evidently, it was the other way about, which is the painless explanation for the profusion of gods and religions, and the fratricide both between and among faiths, that we see all about us and that has so retarded the development of civilization.”

What are the alternatives to organized religion?  Literature, not scripture, sustains the mind and – since there is no other metaphor – also the soul.  We do not believe in heaven or hell, yet no statistic will ever find that without these blandishments and threats we commit more crimes of greed or violence than the faithful….We are reconciled to living only once, except through our children, for whom we are perfectly happy to notice that we must make way, and room.  We speculate that it is at least possible that, once people accepted the fact of their short and struggling lives, they might behave better toward each other and not worse.  We believe with certainty that an ethical life can be lived without religion. [Emphasis is mine-- Ann and I were married at NYC’s Ethical Cultural Society which practices the “religion” of humanism – valuing the importance of each individual, celebrating diversity, and believing that our collective deeds create our own heaven or hell right here.] And we know for a fact that the corollary holds true – that religion has caused innumerable people not just to conduct themselves no better than others….

No wonder Thomas went off the deep end reading this book.  The title of the second chapter is “Religion Kills” and is self explanatory.  How many people have died because of, or in the name of, religion?  How many wars were fought with both sides praying to “their” God to annihilate the other?

Much of the rest of the book examines religion by religion, showing the contradictions and logical fallacies of their scriptures, their inherent harshness, and their indoctrination procedures.  Get them while they’re young.  In fact one chapter questions whether religion could be considered child abuse.  I felt that way during my “religious training.”  How can we ever know how many children had their psychological and physical lives irreparably maimed by the compulsory inculcation of faith….[We] can be sure that religion has always hoped to practice upon the unformed and undefended minds of the young, and has gone to great lengths to make sure of this privilege by making alliances with secular powers in the material world.

As I said, I speak from experience.  I was baptized in a Presbyterian Church (as it was nearby the apartment my parents then lived in), and although my grandparents went to a Baptist Church (I think occasionally, not regularly), for some reason I wound up in the Congregational Church across the street.  My parents rarely went, but I was sent there for “religious training,” something to make me a better person.  This included training during “release time” while I was in grammar school.  Kids had Wednesday afternoons off to go to their churches for even more religious instruction.  So public schools were in this indoctrination scheme as well. I was “confirmed” into the church as a 13 year old, but continued to go to Sunday school.

I’m not sure whether it was unique with my particular Congregational church or it is a basic tenet of the sect, but Calvinism ran deeply in its teaching.  Hard work and good deeds will get you into heaven.  That part of the equation was OK by me at the time, but the corollary, the burning in hell part for eternity did not – even for the slightest of “sins.” As a young child I had nightmares about the devil and hell.

The last time I went to church was when the minister urged the congregation to vote for Nixon as he warned that voting for Kennedy would mean control by the Vatican, just another missile thrown in the war of Protestants and Catholics.  (The Irish short story writer, William Trevor, deals with this issue in many of his writings, in particular “Lost Ground” where a Catholic saint appears to a Protestant boy and the outrage it creates in the town – “Why should a saint of [the Catholic] Church appear to a Protestant boy in a neighbourhood that was overwhelmingly Catholic, when there were so many Catholics to choose from?) Other than attending weddings and funerals, organized religion lost its hold on me then and there.

Hitchens is an equal opportunity exposer of religions, analyzing the hocus pocus of each.  He is most familiar with Christianity, but is well schooled in other religious texts, particularly the other Abrahamic religions, Judaism (he found out later in life that his mother was Jewish) and Islam.  Fascinating – his analysis of the schism within Islam -- and I’m wondering what he would say about ISIS, the latest incarnation claiming to be the caliphate.

Unlike other religions, the Islamic tenet is that the Koran can never be translated and therefore be open to free inquiry by “non-believers.” This is why all Muslims, whatever their mother tongue, always recite the Koran in its original Arabic….Even if god is or was an Arab (an unsafe assumption), how could he expect to ‘reveal’ himself by way of an illiterate person who in turn could not possibly hope to pass on the unaltered (let alone unalterable) words?

I understand why a very religious person may dismiss this as a polemic, but anyone with an open mind will perhaps agree that organized religion just seems to complicate everything, and extreme interpretations of the scriptures, whether Christian, Muslim, etc. add violence to the equation.  I’ve always wondered how any religion can claim to be the “true” one when there are so many other ones including splinter sects claiming the same.  Surely, at least the majority is wrong if not all.  Of course, these are individual decisions and I try to respect all religions provided they are non-violent and do not proselytize.  In fact, there is something to envy about someone who is so confident that there will be a happy afterlife instead of the nothingness from which we came. 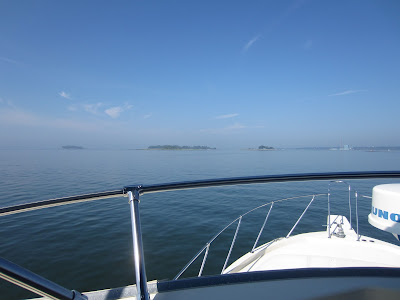