Fifty years ago.  Can it be?   There are few moments of our lives that are indelibly etched in our memories.  9/11 was such a day .  But there only those of a certain age who can remember that horrid day of Nov. 22, 1963.  Two years ago I briefly wrote about my own recollection and I quote that entry as it is a suitable opening for a more detailed account: 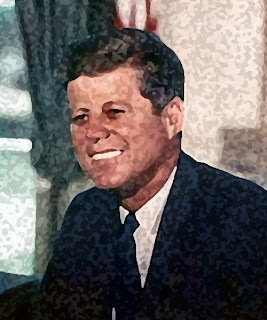 We had tickets for a concert at the Brooklyn Academy of Music that night, one of the few cultural events in New York City that was not cancelled. An unrehearsed version of Beethoven's Egmont Overture was performed rather than the regular program. We filed out, silent, stunned, weeping openly. In quick succession Oswald was apprehended, and while we watched it on TV with others, Jack Ruby assassinated him.

To have borne witness to them all is almost dreamlike, but Friday, November 22, 1963 is emblazoned in my mind's eye.

One would have had to live through the Kennedy era to fully appreciate the anguish of that day, and the subsequent weekend, and ultimately what that day symbolized.  My first real awareness of Jack Kennedy (other than his being a Senator and a war hero), was when he ran for President in 1960.  I was not eligible to vote as an 18 year old (21 was the age then and it was not lowered to 18 until eleven years later), but as a freshman in a predominately Democratic-leaning college, I was caught up in the Kennedy message.  He talked about the future and just did not seem to be content with politics as usual.

My parents were staunch Republicans.  Nixon all the way.  My father was horrified by my views.  And, as I was in the process of breaking from my parent's home, his reaction only reinforced my support of Kennedy.  The other tripping mechanism was the Congregational church I used to attend (my parents sent me there for religious training and expected me to go to Sunday service, which they rarely attended).  The minister at the time warned his parishioners of the dangers of electing a Catholic, inviting the Pope into American politics.  That was the last time I was in a church other than for a wedding or a funeral or to visit one that had historic significance.  Anti-Catholicism was as big an issue in that election as racial / birthplace issues were in Obama's.

I think if the Kennedy - Nixon election had taken place before television finally established a major role in elections, Kennedy would not have had a chance.  But TV made the difference as Nixon came off looking like a perspiring used car salesman with a cool Kennedy sitting beside him, at home in front of the camera.

And so a new era of politics ensued, but that quickly went downhill as Kennedy had one test after another, first the Bay of Pigs fiasco, which merely foreshadowed the more serious confrontation over Russian missiles placed in Cuba two years later, and then taking on the steel industry over price increases they had promised not to implement.  These were headline topics and both diminished, somewhat, the Kennedy mystique.

But nothing prepared us for what happened in October, 1962, the Cuban Missile crisis.  This made the Cold War more than a theoretical event, as Kennedy took the calculated risk that a blockade (actually a "quarantine") of Cuba would give Russia an opportunity to back down, probably the most important decision of his Presidency.  We were on the brink of nuclear war and living in a college dormitory in NYC the anxiety ran especially high.  Had such a war broken out, Washington and New York would have been first targets.  Alternatively, there was talk about an invasion of Cuba and we wondered whether we would soon be enlisting in the Army.

But through skillful behind-the-scenes diplomatic negotiating, the crisis was ended and the following year was relatively placid (except for the occasional mention of Vietnam), with improving diplomatic relations with Russia, a veritable Camelot era the Kennedy mystique had so often suggested.  At the end of my Junior year, I was married (June 1963 -- to my first wife, also a Junior at college) and we moved into faculty / married student apartment facilities in the dormitory, working part time and summer jobs to pay for rent, utilities, and food. So, we were married only four months when the momentous day of Kennedy's assassination took place.

We did not own a TV, but we were friends of a Drama professor, Barbara Pasternak, who also lived in the faculty apartments with her husband, Mel.  Barbara treated us almost as colleagues as my wife was acting in the university's theatre department and I was a student in Barbara's Drama-as-literature course.

They had a TV so we spent most of that gloomy aftermath of Kennedy's assassination in her apartment, frequently with other faculty members, watching, stunned, at the turn of events, from Jack Ruby's assassination of Lee Harvey Oswald to sadly watching Kennedy's flag-draped coffin as it moved through Washington on an open carriage.  Little did we know what this horrible event would presage, such as the assassinations of Kennedy's brother Bobby, Martin Luther King, and Malcolm X.  Or, now from the prospective of 50 years later, add the commonplace local shootings, slaughterings in malls, movie theatres, schools, not to mention wars and terrorism.

Many years later, sometime in the late 1980's my current wife, Ann, and I were sitting on our boat in Block Island and a large yacht was approaching Payne's Dock.  The word quickly spread, that it was owned by a friend of Jacqueline Kennedy, and she was aboard (this long after her second husband, Aristotle Onassis, had died).  Naturally, everyone was hoping that she would step off the yacht and perhaps walk on the dock, but she did not.  Instead, I thought I caught a glimpse of her in the salon through thin curtains, almost like a cameo profile.  I'm sure she had wondered, as I have all these years, what could have been.  What kind of alternative history would have been written had Nov 22, 1963 been just another, forgettable, day?
Posted by Bob at 6:02 AM