After my last post, Google informed me that was Lacunae Musing’s 300th entry, a milestone of sorts.  When I began this blog almost five years ago, I had no idea where it might lead or, even, whether it would merely be a passing dalliance.   I had discounted writing about investments, something I know enough about to be dangerous, or about publishing, which, when I retired, I knew a lot about, but by the time I began to write in this space, the publishing world had changed dramatically.  Nor did I want to espouse only political views, although I’ve posted my share on the topic.  No, I wanted to write something that simply expresses my interests (as well as my views) and experiences (including some family history) and, perhaps, along the way make a small contribution on the WWW. The one thing I wanted to avoid is turning it into a job; I have no hidden agenda, no source of income from this effort.  There is only the satisfaction from writing, and having a “written trail” – a form of accountability, an intellectual balance sheet that is auditable.

As far as blogs go, mine is but a minor star in a minor universe.  Comparing this blog’s statistics to those of my blogging “hero” – to me the “father” of the investment blog—Barry Ritholtz’s The Big Picture -- shows the stark differences between a blog written by an erudite professional such as Ritholtz, and an unfocused personal blog.  It is like comparing the New York Times to a mimeographed newsletter (does the mimeograph still exist?).  Google tells me that I’ve had 25,000 page views now. Ritholtz’s blog has had 5,000 times more (and well deserved)!

Of course, I don’t view this as a competition, but it puts my humble contribution in perspective. Going back to Google’s statistics, the most viewed pages of my blog were mostly about trips we’ve taken, people presumably landing on those pages as they are contemplating (or have taken) similar ones. (In October when we will return from visiting Norway, Ireland, Scotland, Iceland, and Greenland and I’ll look forward to posting a write up with plentiful photographs.).  Just for the record, here are the five most read pages:

Late in the game I began to add labels to the entries as the eclectic nature of the blog needed some sort of thread to tie everything together.  Unfortunately, as much of this work was done retrospectively, it isn’t a true index because of inconsistencies.  But it does give a handle on the contents with more than 350 labels.

I haven’t incorporated the popular “comments” feature in the blog as I just did not want to deal with reader’s comments publicly.  That felt like work to me.  My email address for the blog is in my profile (lacunaemusing@gmail.com), and I’ve received and responded to comments that way.  It certainly cuts down on casual comments when someone has to not only write an email, but identify him/herself as well. 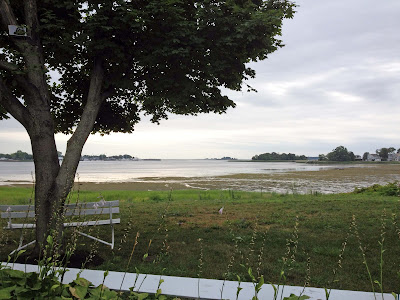 The political season is heating up and I’m so disgusted with Super Pac advertising, and the unbearable rhetoric from both sides of the aisle that I doubt whether I will be as engaged in these blog pages as I was during the last presidential (and historical) election cycle.  To make my personal views clear, I think President Obama, given he is a mere mortal, has done about the best he could given the economic mess he was handed and the political roadblocks thrown at him.  But his campaign rhetoric has also worked against him, promising too much.  Also, I’ve criticized some of his priorities in these pages, so it is not as if I am a raving liberal.  I like to think of myself as a fiscal conservative and a social liberal and one might say that the two are not compatible; I think intelligent compromise can transcend many of the disagreements that are aired like dirty laundry in the media.  Of course, there are also the lunatic fringes and there is no compromise possible with them.

In fact, I recently learned, there is actually a word to describe this endless obfuscation of the truth -- Agnotology: Culturally constructed ignorance, purposefully created by special interest groups working hard to create confusion and suppress the truth.

And to whom do I give a hat tip for this morsel of incredible insight? -- Barry Ritholtz! (Who, in turn gives full attribution to the word’s creator, Stanford historian of science Robert Proctor.)  Ritholtz uses the term as but one element in his recent entry Defective Government By Design   asking the rhetorical question, “Is it democracy or plutocracy when less than 200 people drive election spending in a nation of 300 million?”

This entry is about the rise of corporate power and the Super Pac -- implications that are onerous for democracy.  I’ve written about it before, but if you land on this entry and want to know more, go to the foregoing Big Picture link. 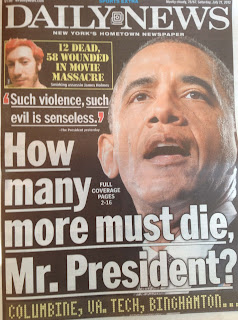 Agnotology.  You hear and see its practice every day......say the lie often enough, and in as many forms as possible and voila, it suddenly becomes “the truth”.  In fact, innuendo works as well or even better than saying the lie straight out.

Here’s an example, the Daily News’ agnotological headline, “How many more must die, Mr. President?” – as if the horrific tragedy in Colorado is somehow the President’s fault.  If Obama had a magic wand, he would probably outlaw assault weapons, but he has a Congress to deal with, the NRA, and, of course, State’s rights.  It was theSupreme Court of Colorado which upheld a state law that allows residents to carry concealed weapons, even in schools!  But a glance at the NY Daily News headline plants an agnotological subliminal message.

That is the brave new political campaign world for 2012, different than it was in 2008, although that one too was quite ugly.  I will be relying on Fact Check.org to winnow truth from agnotological fiction.