There are readers who devour mostly fiction and there are those who mostly read non-fiction.  Although I enjoy the occasional non-fiction work, mostly biographies, and, even then, tend to read biographies of writers or musicians, I happily settle down with a novel as my window to the world.  My non-fiction friends tell me I am wasting my time as they lecture about their newest insight into what makes the world tick, or how politics is evolving, and what history really means, from whatever non-fiction work they are reading at the time.

Except for unassailable facts, what occurred and when, fiction and non-fiction can be topsy-turvy, with fiction being closer to the truth.  Most of my daily "non-fiction" consumption is reading the New York Times and the Wall Street Journal, with an occasional Washington Post article for good measure. The WSJ has always had a conservative bent, even more so now that Murdoch's empire has annexed the newspaper and of course the NYT has a more liberal bias.  What the two newspapers have in common, though, is that they are well written.  However, it is amusing how they might look at the same issue, particularly when it comes to politics.  And they have become more polarized during the last four years as we've skirted a near economic depression and our government has moved to a state of immobilization.  That polarization has been further amplified in the media of radio and TV, and has become exponential on the Internet.  People seem to line up to read or view whatever seems to fit their belief system, a form of cognitive dissonance.  So much for so-called "non-fiction."

But writers of fiction and drama drill down to an inner world of their characters, trying to make sense of life from within.  Other artists, those in the performing or visual arts are doing the same, perhaps more abstractly.  What these authors and artists have to say about our world  matter as much as the journalists and non-fiction writers, perhaps more so.  The writers of non-fiction are filtering information even though it is purported to be fact.  The filters of fiction are more intangible leaving the reader not necessarily with neat conclusions, but frequently only with questions.  One has to actually think, something becoming more alien in our sound bite, "facetweet" cyber world.

So I find it fascinating when writers are asked to comment, directly, not through their fiction, about the state of the world.  The P.E.N. (poets, playwrights, essayists, editors, and novelists) American Center is hosting a World VoicesFestival  beginning today and A. O. Scott, a critic for The New York Times asked Margaret Atwood from Canada, E.L. Doctorow from the United States, and Martin Amis from Britain "to consider the question of America and its role in global political culture."

Margaret Attwood writes a playful parable by trying to explain the state of American culture and politics to a group of visiting Martians, Hello, Martians. Let Moby-Dick Explain.  She uses two well known short stories of Nathaniel Hawthorne "The Maypole of Merry Mount," and "Young Goodman Brown" to make the point that the bickering over individual freedom vs. the rights of the group and the American quest of finding satanic elements in the enemy du jour is deeply ingrained in the American soul (witch hunting then, and "right now it’s mostly ‘terrorism,’ though in some quarters it’s ‘liberalism’ or even ‘evil-green-dragon environmentalism.’ ”)

The Martians are TV and Internet savvy.  They come to their own conclusions about the US: "Though American cultural hegemony is slipping, we perceive: newly rich countries such as India and Brazil have developed their own mass media. Also, America’s promise of democracy and egalitarianism — the mainstay of its cultural capital, widely understood — is being squandered."

Attwood urges them to read Moby Dick, which they do in an instant (Martians are very bright) but  "then they consulted translate.google.com™ for an expression that would best convey their reaction. 'Holy crap!' " --- coming to the conclusion that the novel was a predictive metaphor for the very state of America today (check the link for details).  In short, to understand America, one must look to its literature.

This is a four phase process (we've gone through the first three and are in the process of completing the final phase argues Doctorow) "to achieve unexceptionalism, the political ideal that would render the United States indistinguishable from the impoverished, traditionally undemocratic, brutal or catatonic countries of the world...."

Here is one of America's leading novelists, works such as Ragtime, World's Fair, Billy Bathgate, and Homer & Langley, who is plainly disgusted at the direction of the country.  His "primer" is clearly an invective borne out of the same sense of powerlessness and frustration many feel.

Finally, the UK's Martin Amis weighs in with Marty and Nick Jr. Go to America about when he first visited America as a child with his family in 1958, (he and his brother wanting their names to "sound American" hence, "Marty" and "Nick, Jr.")  I like to read what visitors have to say about their impressions of America and once got caught up in Charles Dickens' first trip to America, incorporating some of his "American Notes" in my 2005 edited collection, New York to Boston; Travels in the 1840's

Amis' family came because his father was a visiting professor at Princeton.  Martin Amis says "We came from Swansea, in South Wales. This was a city of such ethnic homogeneity that I was already stealing cash and smoking the odd cigarette before I met — or even saw — a person with black skin."

Some people would like to think that we live in a post-racial era but Amis reminds us of the entrenched racism, not only when he lived in America as a child (when he returned to the UK in 1967 his father wrote a poem about Nashville which ends But in the South, nothing now or ever. / For black and white, no future. / None. Not here.) but now as well, concluding with a reference to the Trayvon Martin case, with a cynical twist at the end, "Leave aside, for now, that masterpiece of legislation, Stand Your Ground (which pits the word of a killer against that of his eternally wordless victim), and answer this question. Is it possible, in 2012, to confess to the pursuit and murder of an unarmed white 17-year-old without automatically getting arrested? Ease my troubled mind, and tell me yes."

I wrote about the Trayvon Martin tragedy soon after it occurred.  Mine wasn't a race to judgment, but that is what the conservative press would have you believe is happening. A man is indeed innocent until proven guilty, Amen to that I say.  But who speaks for the "eternally wordless victim" as Martin Amis so forcefully posits?

We live in volatile times and need to listen to our creative writers. 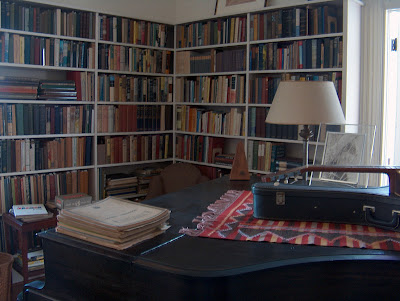