It was brilliant and warm here on Jan. 1, 2012, a perfect day for venturing to our new go-to destination of Munyon Island on our boat where Ann, Jon and I had the beach pretty much to ourselves. Not much to do there but as it was a Sunday, we had the New York Times to keep us company, relax, and watch the yachts go by on 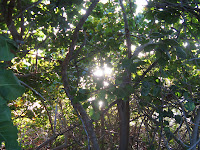 Lake Worth. We decided to return home via the Earman River.

As our home is actually on an island, we have two ways of reaching Munyon, the northern route via the Intracoastal or the southern route via the Earman River. This screen shot from Google, showing our home (circled at the west portion of the shot) on the North Palm Beach Waterway and the Munyon docks (circled on the east), speaks for itself. Further east beyond Munyon is MacArthur Beach State Park on Singer Island and then the Atlantic. 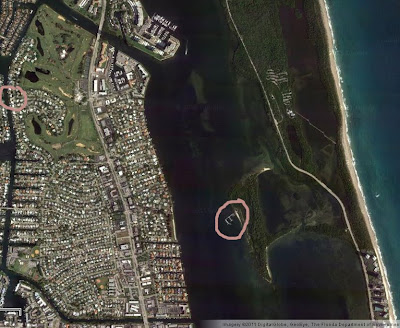 Returning via the Earman we went past a man jet skiing with his dog. It was an absolutely perfect ending to our New Year's Day of boating, a Florida moment, bringing a smile to everyone's face. 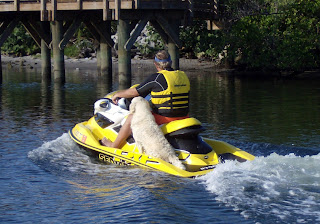 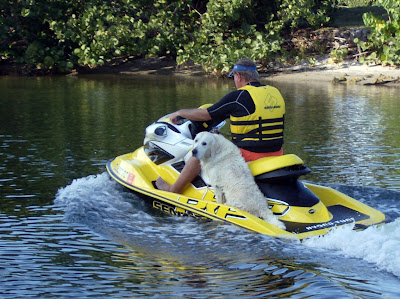 But what would New Year's Day be without friends, other than man's best friend? Years ago half the day would be spent on the phone with friends but now there is email so I caught up with many via that route. Still, I have had a long standing agreement with my old friend and colleague Ron to avoid email on that special day so we had a marathon talk when I returned from Munyon. Naturally our conversation moved from remembering other colleagues in publishing, to the state of the industry (particularly the impact of eBooks), to politics, and finally to our families. His "kids" are doing well as are mine and we both recognize the truth of "you're only as happy as your unhappiest adult child." In Ron's case there are also grandchildren -- in Washington DC --and he is lucky enough to live fairly nearby in North Carolina.

I also "spoke" to my old friend Ray through his wife, Susan, as Ray was in the bilge of his boat all day repairing a generator. He and Sue spend the winter in Boat Harbour, Bahamas on their boat (which is their year-round home). We see them when they briefly visit on their way to or from the Bahamas and in Norwalk, Connecticut where we both live on boats during the summer.

On New Year's Day I also think about my dear friend and colleague Howard who died at such an early age more than three years ago. I used to speak to him on New Year's Day so that is such a void. He was a brilliant, talented person (click onto this link to see his superb carvings of a Manatee and Koala Bear), gone but always remembered by me. I also keep in mind, with great respect, another friend and colleague, Peter, who has now been out of my life, but not memory, for nearly twenty years now.

Finally there was some surprising news that arrived by email on New Year's Day. But first brief background information. My first job out of college in 1964 was at a division of Academic Press, Johnson Reprint Corporation. I was hired by the Vice President at the time, Fred, who was living with his partner, Michael. I remember when he hired me, thinking he's so old, 35. Ha. About six months later he also hired a "sassy dame," and she showed up at a New Year's Day party that Fred and Michael threw, I think it was Jan. 1966. She was wearing a backless dress right down to the tip of her derrière and believe me, even though I was there with my 1st wife, I took note as she moved to the music. Later she became wife #2 (Ann). So that little intersection of time and space changed my life and hers, thanks to Fred's astute hiring practices.

Here are Michael, Fred and me sometime after I had turned 35. 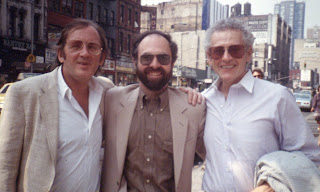 Well, Fred and Michael have stayed together all that time and, as Fred put it, they "finally tied the knot after 54 years," a civil union performed at New York City hall at the close of 2011! What better way to start the New Year? 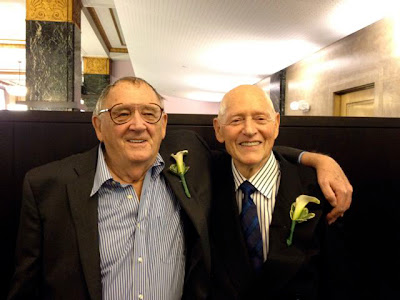