Perhaps it is merely wishful thinking that certain values such as loyalty, conscientiousness and dedication can persevere. There is anecdotal evidence to the contrary in today’s world, perhaps exacerbated by the computer chip which has effected all forms of communication, even changing how we think and write (140 character tweets is the modern attention span LOL). No longer are there jobs that last for decades (when there are jobs at all) and popular culture has supplanted most of the fine arts. There is not even a pretense of courtesy or refinement and all one has to do is get on an airplane – as we are about to do -- to observe that point. So in this oasis we now call the modern world, I went back in time to get ready for an overseas trip. More on that trip when we return in a few weeks, during which time this blog will be silent.

My time travel took me to the barber shop I used to frequent when we lived in the Westport area. I went there for more than 30 years and my sons as well when they were children. I normally now buzz cut my own hair and as we live at our marina nearby Westport only in the summers, I see them but once a year, usually before a trip such as the upcoming one. Tommy has been the proprietor of Westport’s Compo Barber Shop since 1959. I always had my hair cut by his sidekick Felici who is from Italy and still speaks in a broken accent.

On Friday morning I walked into the shop. Tommy was sweeping the floor and Felici was getting ready for his next appointment, mine. How often does one embrace his barber? Hugging both Tommy and Felici seemed to be the appropriate thing to acknowledge my kaleidoscopic visit. It also was mutual acknowledgement that we are survivors, not only in the corporal sense, but as sojourners from another era.

Tommy proudly displays photographs from the Westport Historical Society in his shop as well as ones of himself cutting the hair of multiple generations of the same family. I looked up and down the Post Road where his shop has been all this time and noted that the neighboring stores are all different. The stores come and go but Compo Barber Shop has been a bulwark in the community. It is a throwback to small town America, one that Richard Russo often chronicles in his novels.

I obviously have some special feeling for the camaraderie between a barber and his customer, a unique male bonding that I’ve written about before, particularly as my childhood barber, Joe, literally became my Uncle Joe.

So after I settled in the chair we covered the checklist of typical barbershop banter: our respective health, how the “kids” are doing, the weather and the recently departed storm, Irene, what the country coming to, the tragic shape of the economy, and the sadness I feel having seen my publishing business in town finally come to an end. With my now perfect haircut I went to the cash register to pay but they would not accept payment. I protested, but understood that some things are more important than money. Just seeing me was enough for them and that feeling was reciprocated as I said “see you next year,” and hopefully the next, and many more after that. 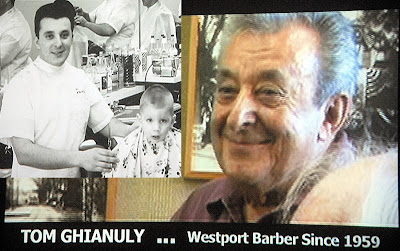 Photograph courtesy of WestportNow.Com
Posted by Bob at 6:55 AM