She's Quick on the Trigger

With targets not much bigger than the president's deficit commission. I don't think I've ever actually READ anything by Sarah Palin, although I've seen her paraded before TV cameras, so it was with some interest that I noted "her" opinion column in the Wall Street Journal, Why I Support the Ryan Roadmap; Let's not settle for the big-government status quo, which is what the president's deficit commission offers. 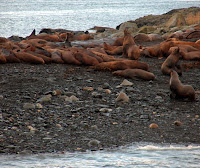 I had expected a folksy take on the topic in keeping with her TV persona, perhaps sprinkled with homey references to Alaska wildlife, or more aptly the disappearing wildlife when Sarah Oakley has her high-powered rifle with telescopic sight at her side, but instead was greeted by a more or less professionally written piece of journalism, quite possibly with the help of the people at News Corp which owns the WSJ and also owns Fox which in turn employs Ms. Palin. She or her ghost writer is "disappointed" in the deficit commission's recommendations but commends the commission for exposing "the large and unsustainable deficits that the Obama administration has created through its reckless 'spend now, tax later' policies." I go speechless when reading such an accusation, feeling like Melville's Billy Budd confronting the evil Claggett. Sarah, do you really believe what "you" wrote? Not only are the deficits at least partially shared by your Party (not to mention the National Debt most of which could be pinned on the Bush era), but Congress now has the opportunity to roll back some of the tax forgiveness for the super wealthy, both in terms of incremental tax rates and the inheritance tax, and your Party is stonewalling that prospect. However, pardon my impertinence, "a man never trifles / with gals who carry rifles...Annie Get Your Gun.
Posted by Bob at 3:34 PM