In an ironic twist, an economist turned entrepreneur writes a rigidly academic critique, The Recklessness of Quantitative Easing, and an academic pens an anecdotal piece of writing on a different but related subject, I Can Afford Higher Taxes. But They’ll Make Me Work Less.
Recklessness by John Hussman, whom I’ve quoted before in this blog as I consider him to be one of the clearer thinkers about the uncharted territory we call today’s economy, argues that the Federal Reserve’s announced intention to pursue a second round of QE is to drive “interest rates to negative levels in hopes of stimulating loan demand and discouraging saving” and to “increase the supply of lendable reserves in the banking system.” But will this increase output and employment?

Hussman thinks not as “interest rates are already low enough that variations in their level are not the primary drivers of loan demand.” There is simply a lack of confidence – both for the consumer and businesses -- that they will have the income in the future to pay off loans. So low or even negative interest rates is not a barrier and “removing a barrier allows you to move forward only if that particular barrier is the one that is holding you back (the economic term being "constrained optimization" as he explains.)

“Instead, businesses and consumers now see their debt burdens as too high in relation to their prospective income. The result is a continuing effort to deleverage, in order to improve their long-term financial stability. This is rational behavior. Does the Fed actually believe that the act of reducing interest rates from already low levels, or driving real interest rates to negative levels, will provoke consumers and businesses from acting in their best interests to improve their balance sheets?”

The effect of all the talk about QE2 has been to propel gold to new highs and to further erode the value of the US dollar as the Fed dramatically expands its balance sheet. “But once the Fed has quadrupled or quintupled the U.S. monetary base from its level of three years ago, how will it reverse its position?” Hussman’s answer is that many years down the road it will be forced to sell off the instruments it is buying, driving interest rates much higher as foreign buyers might be absent from such auctions, and undermining whatever recovery might have begun of its own accord, just further accentuating the boom bust cycle.

He has constructive suggestions, fiscal responses that might include “extending unemployment benefits, ensuring multi-year predictability of tax policy, expanding productive forms of spending such as public infrastructure, supporting public research activity through mechanisms such as the National Institute of Health, increasing administrative efforts to restructure debt through writedowns and debt-equity swaps, abandoning policies that protect reckless lenders from taking losses, and expanding incentives and tax credits for private capital investment, research and development.” Of course many of these require the cooperation of Congress and watching the mud slinging of the mid term elections, one has to wonder.

But Hussman’s article is must reading it its entirety, especially if you are an individual investor and wondering how to position a portfolio in this strange new economic world. The net effect of the Fed’s actions, besides the obvious nearly zero return on any CD you might buy, is to “force” the investor to move into riskier assets commodities in particular and equities as well. One could also “play” the decline of the dollar by investing overseas or in US multinational companies, which derive a majority of their income abroad. But to what extent QE2 is already baked into the prices of these riskier assets is anyone’s guess. There is also the possibility of a more protracted deflationary period than anyone can imagine right now, with the ongoing real estate crisis and high unemployment having a continuing impact. There seems to be a heavy reliance on the Fed’s future actions leading to an idyllic outcome. I think Hussman would disagree.

One of his suggestions as noted is “ensuring multi-year predictability of tax policy” which leads me to the other economist, Professor Mankiw who is professor of economics at Harvard and was an adviser to President George W. Bush, whose administration has to share some if not a majority of the responsibility of our present economic morass.

Professor Mankiw op-ed piece in the October 9th New York Times, through a convoluted and highly subjective mathematical exercise, argues the proposed tax increase on the 2% wealthiest Americans – some attempt at least to close the budget abyss -- will lead to such people not working much, including, alas, movie and rock stars and even novelists! Outraged, and disappointed that I might not see another Harrison Ford movie, or see my first Lady Gaga “concert” or that Jonathan Franzen will put down his pen, denying us his next novel in protest, I immediately shot off a letter to the editor of the NY Times business section, in which Mankiw’s article appeared. Some very good letters were published in response, but not mine. The nice thing about a blog is I can publish my own rejections! So here is what I wrote:

While it is hard to argue with Professor Mankiw’s math (“I Can Afford Higher Taxes. But They’ll Make Me Work Less”) of what his incremental income might become thirty years in the future in a halcyon tax-free world, his conclusion that movie stars, novelists, rock stars, and surgeons might work less if taxes are increased is based more on his own anecdotal view of working. By his own admission: “I don’t aspire for much more than a typical upper-middle-class lifestyle,” and that’s fine, but don’t blame the tax code for declining his next free lance opportunity. If he should climb down from his Ivy tower and look at the real world with real unemployment around 15%, people trying to work to simply support their families and hold onto their homes rather than handing down wealth to succeeding generations, he might have a little more empathy for a progressive tax code that did not seem to destroy incentives during the Clinton years, the last years in which our country actually had a surplus. And even Warren Buffett and Bill Gates see the fairness in having some sort of an inheritance tax.

Maybe the Times found it too preachy or politically oriented. Perhaps I should have concentrated on the nature of work itself. Remember Hussman’s comment about constrained optimization, that removing a particular barrier only has a beneficial impact if indeed it was that particular barrier holding you back? If Mankiw is entitled to personalize his argument, so can I. I worked as hard when in a higher incremental tax bracket as I did when they were lowered. Why? I loved work, simple as that. And, that is what is missing not only from Mankiw’s formula but how our society looks at work and values workers.

I remember my first visit on business to Japan in the 1970’s, the taxi cab drivers waiting at the hotel for a fare, their cabs gleaming as between fares they would polish and clean their cars. The refuse collector doing his job well was as highly valued by society as a company executive. Japan today, of course, suffers some of the same maladies as ours, with a twenty-year head start on the phenomenon of deflation, so perhaps that has taken its toll on their workers. Somehow, as a society, we need to value all workers and restore work as something to be embraced.

Of course we don’t always have an idyllic choice of the work we do in our lifetimes, but we do have a choice of doing it well or not and by choosing the former, we open a path to finding it meaningful. I’m sorry Prof. Mankiw chooses whether he will write an article or accept an invitation for a speech merely based on what his incremental income bracket might be, although I think most people would envy that he actually has a choice.

I like what the great short story writer, Raymond Carver, wrote thinking about a friend who admitted he wrote something just to make a deadline and make a buck, knowing he could have written something better if he took the time. “If writing can’t be made as good as it is within us to make it, then why do it? In the end, the satisfaction of having done our best, and the proof of that labor, is the one thing we can take into the grave. I wanted to say to my friend, for heaven’s sake go do something else. There have to be easier and maybe more honest ways to try and earn a living. Or else just do it to the best of your abilities, your talents, and then don’t justify or make excuses. Don’t complain, don’t explain." 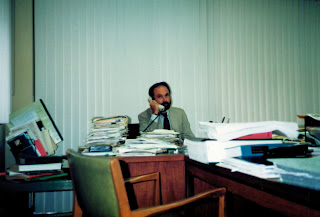