On our 13th anniversary Ann gave me a book, How to Live Aboard a Boat inscribing it, “Here’s to a ‘dream-come-true’ one day! Happy Anniversary!” Little did we know that one day we would, well sort of -- at least for the summers. And we’ve been doing it, now, for more than ten years. There is a long history that led to this, involving more adventurous cruising, but as our interest in traveling greater distances by boat seemed to diminish with age, we have settled on the port where it all began, Norwalk, CT, and our favorite destination, one of the small Norwalk Islands. 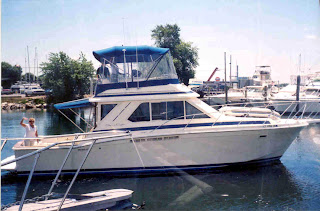 Having had several boats, some larger and pricier, we ultimately scaled down to a classic 38’ Chris Craft Convertible. In 1984 Chris Craft had bought a well-known Pacific coast boat builder,

Uniflite. During the Vietnam years Uniflite built river patrol boats for the Navy. In the pleasure boat market they were known for building heavy, rugged cruising boats. Chris Craft continued the Uniflite line under the CC brand name until 1989. By then the boating industry was being badly hurt by the beginning of a recession. This also coincided with a decline in market share for Chris Craft. Consequently, CC phased out the Uniflite hull, and closed the factory in Bellingham, WA where our boat was made.

Although we are not the original owners of the boat, we’ve known her since she was first 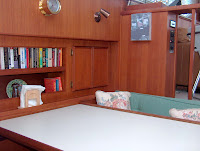 launched in 1987. The original owner was a friend with whom we used to cruise, and our boats had run side by side many times to such ports as Nantucket and Block Island. So the ‘Swept Away’ as she is now named, had been part of our boating consciousness and it seemed like fate when she came on the market at about the time we had decided to downsize.

As is often said, “they don’t make ‘em like that anymore.” Today’s powerboats are lighter, faster, mostly “Euro-styled” which makes them look like (to me) a gaudy sneaker. I am a traditionalist, and would choose the quality of the fiberglass, construction, and style of this boat to most new ones off the production line of 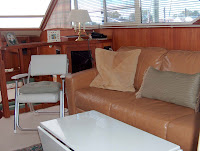 comparable size (not to mention the astonishing monetary differences between those new boats and our old classic). The interior walls and doors of the Swept Away are teak with other touches of traditional boating from another era. Her 13' 11" beam, 28,000# displacement makes for seaworthiness while her salon, fully equipped galley, dinette (which doubles as my desk), head and shower, and separate stateroom make it our little condo on the water. It has a huge cockpit for a boat this size, the perfect “back porch” for reading on languid summer afternoons. Thanks to the help of friends such as John and Ray, and our son Jonathan, not to mention the services of the “Soundkeeper,” we continue to be able to take pleasure in this unique lifestyle. 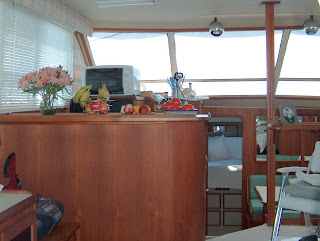 So, it is time to go back to our summer home, do some local cruising, and to see old friends.
Posted by Bob at 11:08 AM