Living on a Boat

That is what my wife, Ann, and I do during the summers. Live on a boat. Hence, my entries will be few as computer time on board is sporadic. I’ll be writing this entry episodically and probably post it in stages, but I might as well start at the beginning, as life on the water is something that has significantly defined who we are.

My introduction to boating began in Sag Harbor near the end of Long Island where my family rented a cottage each year in a little section of cottages called Pine Neck, a block from the Noyac Bay, between the twin forks. As a kid, I thought this was the most exotic place in the entire world and to some degree, now nearly sixty years later, I still sometimes feel that is where I would like to live.

Sag Harbor itself was (and still is) a quaint, seaside New England town, an old whaling village, although now, it is also part of the upscale Hamptons, but the great attraction for us in the early to mid 1950’s was the Bay itself, going to the little beach on Long Beach Road each day. There was a food shack there where we could get greasy fries and a hot dog, listening to Teresa Brewer belt out I Don't Want a Ricochet Romance on the juke box, the refrains of “I can't live on ricochet romance, no, no not me; If you're gonna ricochet, baby, I'm gonna set you free” lingering in my mind long after the song ended.

At night we would go into the town of Sag Harbor itself to the one movie house (here Ann and Jonathan stand in front of the theatre when we visited Sag, some thirty years after I last saw a movie there) and maybe get some ice cream. What could be more heavenly for a kid? For me, it was to have a boat, one with an engine that I could use to explore the Bay. Shelter Island was not far away but I knew that if I could inveigle my father into renting a boat that destination would probably be off limits.

Postponing the rental of my childhood dream yacht (a row boat with a small outboard engine) was the appearance of Hurricane Carol that made landfall on Long Island on August 30, 1954 as it was nearing peak intensity, and close to high tide. Although our cottage was slightly elevated

and a few hundred yards from the Bay, the first floor was deluged with water. As a kid it seemed exciting but it foreshadowed other hurricanes, Gloria in 1985, and others that would more seriously impact us Floridians later in our lives, Francis and Jean in 2005, and Wilma in 2006. Between those and some notable Nor’easters we’ve endured, I sometimes wonder why we still persist in living on the water itself.

Sag Harbor was my first introduction to boating on my own, my father finally allowing me to rent that little wooden rowboat with a tired Johnson outboard engine which seemed to break down as often as it ran. The boat reeked of fish, gasoline and oil. Many years later in our boating lives Ann and I revisited Sag, and found that same marina, and the same food shack.

With my father along to show me the ropes, it soon became apparent that an outboard engine was as foreign to him as it was to me. Once we got it started after repeated pulls of the cord, with the exhaust hanging around us in the heavy air, the thought also went through his mind that we might adventure over to Shelter Island, clearly visible in the bay but, in the slight chop, oh so far away that we had to finally turn back. After a few warnings about staying close to shore, I was allowed to take the boat out by myself, the thrill of which probably lay dormant, awaiting my adult life when it kicked in with a vengeance.

But Sag Harbor wasn’t my only initiation to boating. My father’s younger cousin, Bill, had, what at the time was considered the Cadillac of small boats, a 28 foot Chris Craft. The boat was berthed in New Rochelle and he and his wife invited our family out several times. This was high adventure to me, leaving the New Rochelle harbor and anchoring off of Sands Point, which is just across the Long Island Sound. We would swim off the boat and sometimes train our binoculars on Perry Como’s house at the point, hoping to see the crooner. There are some ironies to the experiences with Bill’s boat. He bought his boat at Rex Marine which is a short walk from the marina where we now dock our floating summer-home and where I am presently writing this entry. We coincidentally now own a Chris Craft ourselves, a 1987 Commander with a hull built by Uniflite (the firm that built the hull for WW II PT boats). Even our home in Florida is not far from Perry Como’s in Jupiter before he died a few years ago.

Because of Cousin Bill’s boat, my father thought that he, too, could become a sea captain and quite uncharacteristically, he impulsively bought an old 35’ Owens, not fully realizing the work it would demand and of course the expertise that is required to handle such a boat. His temperament was not well suited to boating and even worse, my mother hated the work. A Captain without a cooperative, even enthusiastic mate, is doomed to boat alone or very little. 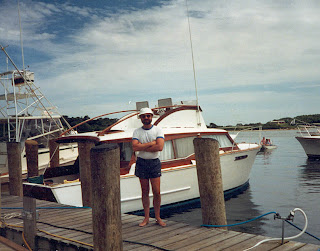 Many years later at Block Island I found a sister ship, pictured here in the background.

Nonetheless, we had that boat for about two years, and my parents named it after my sister and myself, ‘BobaLynne’ which I thought was kind of clever. Here I can be seen pulling on a stern line when we were anchored off a beach. In the foreground, but very blurred, is my mother’s hand holding her cigarette. Both my parents smoked, incessantly. No wonder I took up smoking when I was 16, eventually quitting when I was 33. 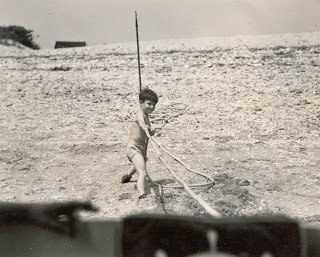 The high/low point of the BobaLynne was an ambitious cruise up the Hudson River to Poughkeepsie. My Uncle Phil had a summer home nearby so the idea was for my father and me to bring the boat there while my mother and sister drove up the car. We would stay at my Uncle’s home and explore the Hudson. Dad and I made it down the Sound through Hell’s Gate and stayed overnight at a marina at the base of the Tappan Zee bridge, that was still under construction. After leaving the marina, one of the old Ford truck engines in the Owens broke down and we struggled on one engine to Poughkeepsie. The boat was out of commission for the rest of our vacation and I no longer remember how we got it home. Suffice it to say, the boat was 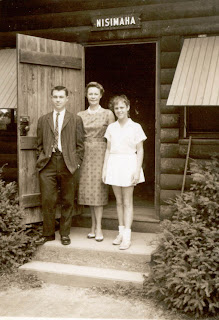 The following year, as I remember, we returned to Sag Harbor, for the last time. Again, I was allowed to rent a boat during those last two weeks of August. My sister attended a camp nearby and here we are standing in front of her “Nisimaha” cabin, me with my crew cut.

To replace our Sag Harbor rental, we returned over the next few years to Uncle Phil’s summer home in Stanfordville, New York, an out of the way country place not far from Millbrook. I loved it there too, mainly because, I had my Remington slide action 22 caliber rifle which I was allowed to use to shoot targets in the valley below, until one of the bullets ricocheted off a rock and landed in someone’s living room a mile away. To this day I can’t understand how the bullet travelled so far, but that was the end of my shooting days.

Other activities there included a nearby lake (alas, no boating allowed), the pool in Millbrook, a walk to the general store in the broiling heat, a drive by Jimmy Cagney’s home, and the local movie theatre. I remember seeing The King and I there. Sometime in the late 70s or early 80s I was on the Washington Eastern Airlines shuttle and found myself seated next to Yul Brunner, the one and only King, no matter how many times the Rodgers and Hammerstein musical might be revived. He was reading Playboy but we struck up a conversation, mostly about the film version I had seen as a kid.

However, until my adult life, I was out of boating and I haven’t even begun the story of living on the boat which I’ll continue later.
Posted by Bob at 10:06 AM