God, I Love this Job

Carolyn was my administrative assistant and is still with the company I ran, but now in a much more responsible position. She had a cartoon posted over her desk, one I never forgot. It certainly captured her work ethic and it is the way I felt about my working life.

The cartoon pictured a clearly overworked secretary, slumped over her IBM Selectric (that’s what we used in the industrial age, but I remember my old manual Remington from the pre-industrial age with greater fondness). Although the cartoon character is hardly conscious after a hectic day of work, the bubble caption reveals her thoughts: “God, I love this job.”

I sometimes wonder how I got so lucky or whether it was luck at all -- having work I found so challenging and fulfilling. Was it the nature of the work itself or an inherited attitudinal discipline? My generation, right before the vanguard of the baby boomers, was born to parents who emerged from the Great Depression. Although my father worked in a family photography business that somehow survived the depression, the scars and fears of those economic times reverberated in his thinking.

From the age of 13 on I worked at my father’s photography studio during the summers and I worked part-time jobs throughout college, as a library assistant, in the university’s admissions office, and as a night receptionist at a Brooklyn health clinic. My first full time job after college was as a production assistant for a company that reprinted out of print monographs and journals, a booming business in the early 1960’s as educational funds were flowing to universities in reaction to the perceived scientific leadership of Russia post Sputnik.

My sons argue that somehow it was easier then than it is in today’s Dilbertarian working world. Different, yes, but easier, no. One of my responsibilities in that first publishing job was to prepare original copies of out-of-print publications for photo-offset reproduction. This could 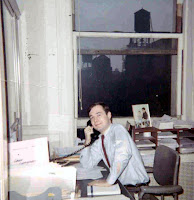 involve tens of thousands of pages from runs of periodicals. Every page had to be reviewed and every blemish that would otherwise be reproduced had to be repaired. Exact “page counts” – front matter, illustrations, and the like, had to be detailed and itemized for the print order.


I made a mental game to stay motivated. How much could I accomplish in a day and still come back for more? My co-workers argued there is no reason to work like that, as no one in management appreciated it. But it was not about pleasing anyone but myself; I had to learn to love it to do it, leaving exhausted at the end of the day, muttering, “God, I love this job.”
.