Kate (the vocalist who I accompany on the piano) and I are preparing our next concert program, which will be devoted to Irving Berlin, Cole Porter, and George Gershwin, indisputably the artists at the heart of the Great American Songbook (GAS).

We have worked together for the past three years giving benefit concerts, paying tribute to the 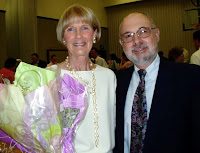 music of that tradition. I met Kate by answering her ad in the Palm Beach Post for a piano accompanist who is familiar with Broadway and cabaret style music. She has used her soprano voice and clear phrasing to entertain audiences for more than twenty years, performing in a variety of community affairs. I feel honored to work with someone with such experience and have learned much about the art of being an accompanist from this collaboration. It’s about listening while one is playing, trying to stay out of the singer’s way on the one hand, and filling in while she is not singing.

While I am not a naturally gifted pianist or have I had much formal training, I continue to try to improve my skills by listening to a number of pianists I greatly admire such as the late Oscar Peterson and Bill Evans.

It was perplexing to read some obituaries of Oscar Peterson who died just last month. A few critics said Peterson’s work was derivative or unemotional. While I was in college I had the privilege of seeing him at Birdland and ever since I have been in awe of his incredible keyboard abilities and followed his recordings. More than forty years later in 2006 he made his final appearance at Birdland to celebrate his 81st birthday. This is after he had had a stroke in 1993, underwent extensive rehabilitation, and learned to play again with his left hand partially impaired.

All artists build upon the base of the past and if Peterson “sounded like” other jazz pianists at times, he also advanced the art to another level. I think he could play more notes within a measure than any other pianist, classical or jazz. And his light touch never strayed too far from the melody and the intention of the composer, perhaps a shortcoming of some later avant-garde jazz styles. Goodbye Oscar Peterson…. http://www.youtube.com/watch?v=-Ebo12xg4ws

Like Oscar Peterson, Bill Evans had extensive classical training and that was certainly evident in his interpretations and compositions. At times one can hear the spare, minimalist approach of an Erik Satie in his music, such as his rendition of My Foolish Heart: http://www.youtube.com/watch?v=a2LFVWBmoiw.
Evans is the consummate introspective artist, hunched over the piano as if he and it are one. His phrasing and chord voicing were innovative and unique. His numerous recordings, in my favorite jazz form, the trio, preserve his genius.

It was mindful of these two artists that I made two CDs at a professional studio last year. Not that my skills can be compared in any way to theirs. If you think of music as a language, they speak at a level I can only fleetingly understand, but I chose some of the pieces they’ve recorded and a few that they wrote. This was intended as an archival effort for private distribution to friends and relatives. The first album, Smile, was followed a few months later by Sentimental Mood. 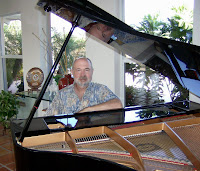 The recording studio experience was intimidating, having about two hours to record the songs I selected for each CD and then an hour with the sound technician deciding what cuts to use and in some cases rerecording a song. I was given the option of wearing a headset to listen to what I recorded, and then merging different sections by picking up the song at a certain point. As I read chords and melody lines, and then improvise everything else, I rarely play a composition exactly the same way. Therefore, I opted to play each piece entirely through and then redoing it if I was not happy with the results. The six total hours in the studio were finally winnowed to two forty-five minute CDs. One of the pieces was an original composition I wrote to my wife, Ann: http://lacunaemusing.blogspot.com/2008/01/annies-waltz.html

Rather than giving my own interpretation of the GAS, I reference the excellent article from Wikipedia: http://en.wikipedia.org/wiki/Great_American_Songbook. My CD selections are simply my favorites, an eclectic group as evidenced by the list at the end of this entry.

I suppose every older generation has a level of intolerance of the music of the younger generation. My parents did not understand the Rock & Roll music of my youth, which we now refer to as the “oldies.” I am now guilty of not understanding today’s music ranging from rap to the fare served on American Idol. At least the oldies are memorable and singable. Will that apply to today’s popular music forty years from now?

A GAS melody is but one of the elements that makes the genre so timeless. Ultimately it is the perfect marriage of the melody and the lyrics, songs that carry meaning and drama, and can be interpreted by the performing artist. Thanks to the pioneers of the genre and their successors and performers, it will endure as long as people listen to music.

From Sentimental Mood
In a Sentimental Mood by Duke Ellington, Irving Mills and Manny Kurtz; Time After Time Lyric by Sammy Cahn; Music by Jule Styne; Moon River Words by Johnny Mercer; Music by Henry Mancini; How My Heart Sings by Earl Zindars; Once I Loved Music by Antonio Carlos Jobim; English Lyrics by Ray Gilbert; Nobody’s Heart Words by Lorenz Hart; Music by Richard Rodgers; Old Cape Cod by Claire Rothrock, Milt Yakus and Allan Jeffrey; Charlie Brown Christmas by Lee Medelson and Vince Guaraldi; Take Five by Paul Desmond; Fortuitous by Bill Oliver; Laurentide Waltz by Oscar Peterson; Spring Can Really Hang You Up The Most Lyric by Fran Landesman; Music by Tommy Wolf; A Cottage for Sale Words by Larry Conley; Music by Willard Robison; Bewitched Words by Lorenz Hart, Music by Richard Rodgers; Where Your Lover Has Gone by E.A. Swan; Mona Lisa by Jay Livingston and Ray Evans; Isn't It a Pity? Lyrics by Ira Gershwin, Music by George Gershwin; What's the Use of Wond'rin' Lyrics by Oscar Hammerstein II, Music by Richard Rodgers; Another Suitcase in Another Hall and Don't Cry for Me Argentina Words by Tim Rice, Music by Andrew Lloyd Webber; Tell Me On a Sunday Lyrics by Don Black, Music by Andrew Lloyd Webber; Not a Day Goes By Words and Music by Stephen Sondheim; They Say It's Wonderful by Irving Berlin; Like Someone in Love By Johnny Burke and Jimmy Van Heusen; My One and Only Love Words by Robert Mellin, Music by Guy Wood; Solitude by Duke Ellington, Eddie DeLange, and Irving Mills; Look for the Silver Lining Words by Buddy DeSylva, Music by Jerome Kern
Posted by Bob at 11:36 AM