During my 35-year working career, I had just two jobs, the first for nearly six years and the last for thirty. Loyalty to the employer and visa a versa was more typical then. But, more importantly to me, was loyalty to the people, co-workers and vendors alike. In fact, these relationships frequently evolved into deep friendships. And, I think that made the difference between “having” to work and loving work.

I was also fortunate to find the profession that found me. I think of the idiosyncratic title of Anne Tyler’s novel, Accidental Tourist, as I was the accidental publisher. As many others of my generation, I married early. At 21 my first wife became pregnant, erasing plans of going to graduate school. Instead, it was off to work I had to go.

At the time my wife happened to have a summer job at Dell Publishing and her boss agreed to give me a one-hour education in the basics of production as a back door into the publishing industry. Knowing the difference between a point and a pica was invaluable lingo to get a job, but, finally, it was nothing more than my typing skills that prevailed in my job search. In 1964 I began work as a production assistant at the Johnson Reprint Corporation, a division of Academic Press.

Publishing became a continuous postgraduate education, providing an opportunity to work with brilliant authors, skilled vendors, and wonderful staff. And treating business vendors as partners – typesetters, printers, and distributors -- made for relationships that spanned an entire working career.

I was particularly fond of our overseas distribution partners who were expert in markets where different conventions and languages made it difficult for a US publisher to compete. We established long-standing relationships in Europe, Japan, Singapore, and Australia. While contracts governed the major terms of these arrangements, a handshake sometime covered the nuances. We shared budgets, forward plans, openly and honestly back and forth. 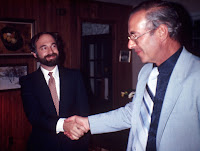 Over the course of time, I became close to the principals of these businesses, as well as their families. None were closer than ties to Peter G. who was the founder of a U.K. company that covered the European markets. He was a brilliant and articulate businessperson with savoir-faire.

Although Peter was thirteen years older than I, we met and joined forces when our respective businesses were in their formative stages. We supported each other in our separate but similar endeavors. We spent time together in our respective Westport and London offices as well as the Frankfurt Bookfair, strategizing, sometimes agonizing, and always laughing. I can still see that glint in his eye as he ruminated about an iconoclastic approach to marketing our publishing list in Europe.

In the early 1990’s Peter was diagnosed with cancer. His illness never brought his spirits down, at least in his dealings with me. Hearing this troubling news, Ann and I visited with he and his wife and we went out on the town instead of moping.

Peter died at the age of 63, fifteen years ago last month. Just days after his death I received an extraordinary letter, emblematic of the man and our relationship. “If there is a lesson to be learned here….”

Although we have not spoken of it much, you will know, Bob, that I have always valued our very special relationship. Few colleagues in publishing have ever shared such a close understanding of each other’s achievements in the face of, and most usually in spite of, frequent adversity, abiding uncertainty, and the constant fear of failure.

I like to think, on the other hand, that we made good use of such time as we could spend together, helping buttress each other throughout the years. Would that we could have seen the next step through together. But, then, there is always yet another step!

Happily, you have inherited relationships (albethey quite different from ours) with both [my sons]. Thus, there promises to be continuity, as indeed there should. However, it now behooves you to play the father figure! The King is dead; long live the King!

I shall remain ever grateful to my surgeon, whose honest and accurate estimates enabled [my wife] and me to crowd our residual quality time together with joyous and memorable events. And, most of all, to [my wife] whose energy, strength and courage have made all things possible. God could not have blessed me with a more loving, caring, and supportive wife.

I want you both to know that I go in peace and with only the happiest of memories fresh in mind. If there is a lesson to be learned here, it is surely that each and everyone of us should value every day along the way – for, certainly, nary a one is given back to do over!
With much love,
Peter
Posted by Bob at 9:12 AM