I am reading Richard Russo’s new novel, Bridge of Sighs. I generally stretch out reading a book by one of my favorite authors, savoring certain passages, making it a point of putting the book down to enjoy the next day so I do not finish the book in a few ravenous readings. Russo is in one of the group of contemporary writers of which I have read nearly everything they’ve written and eagerly look forward to their next work and their next: Philip Roth, John Updike, Anne Tyler, John Irving, Russell Banks, Richard Ford, Richard Russo. To this list I could add recently deceased contemporaries such as Joseph Heller, John Cheever and Richard Yates (whose first novel, Revolutionary Road, I reprinted in the early 1970’s when it was already out of print. -- it will soon be released as a major motion picture -- it has taken the world that long to recognize him).

What draws me to these writers is families, or more specifically, dysfunctional families. Strong mothers or weak fathers or weak mothers and strong fathers with borderline “crazy” behavior, dark humor and the unpredictable maturation of children from those families. Of course if art mirrors life, it may be that “dysfunctional” is merely normalcy in today’s world. I am from one of those families, with parents who were quasi alcoholics. My mother thought she married into a “family” who would give her the love and the things she thought she was denied as a child. But when my father returned from WW II, with no other aspirations than running a family photography business that was established at the end of the Civil War in NYC, the realization that she will never move from her middle class roots in Richmond Hill, N.Y. became just one of the many rages that consumed her from within. Add to that mix extramarital affairs she hinted at, and my father’s inability to “make” her “happy,” and one has the ingredients of a novel, if I could only write it.

No wonder I am attracted to this literature and theatre such as The Subject Was Roses, which my wife and I recently saw at Dramaworks in West Palm Beach. This Pulitzer Prize-winning play by Frank Gilroy from the mid 60’s chronicles a few nights and days in the life of the Cleary family, whose son has just returned from WW II, changed, but not changed enough not to fall into the fold of the old conflict between his controlling, driven, alcoholic father and his abused, emotionally depleted and disillusioned mother. The son is forced to take sides with one parent or the other – to “make nice” – entering into the dynamic trying to ameliorate his parents problems. His attempts, as were mine, are fruitless. Here is a review from the Palm Beach Post.http://www.palmbeachpost.com/arts/content/accent/epaper/2007/10/24/a6e_feathea_roses_1024.html

But I digress, so back to Richard Russo. I think his work has elements of the best of all the writers I most admire, the sardonic humor of some of Philip Roth (Russo’s Straight Man is one of the funniest, laugh-aloud books I’ve ever read), the fragile characters of some of Anne Tyler’s works, the great story-telling ability of John Irving, and the family / husband-wife relationships that resonate in Cheever and Updike.

One of the major issues in Russo is place, upstate NY mill towns that are in long-term decline, the characters caught in the maelstrom of such change, some trying to leave, but emotionally attached forever. Russell Banks touches some of the same bases. Richard Ford makes the New Jersey shore his place while Philip Roth has his Newark environs. Russo brings a gentle humanity to this change, documenting its subtleness and it’s impact on his characters, people who are not larger than life, but are ones we all know and grew up with.

Yes, many of his novels tend to repeat some of the same themes and settings, and one could easily see the similarities between Nobody’s Fool, Empire Falls, and, now, Bridge of Sighs. But while you know you are reading a Richard Russo novel, the stories and characters are somehow different – like movements of a symphony are different, although they are the same work. So, I continue take pleasure in the Bridge of Sighs, reading fewer pages as I reach the end. Like life, if it could only go on.

In an interview (http://www.albany.edu/writers-inst/russo_richard.html) Russo said “I think the place you grow up in is a lot like ‘The Hotel California’: you can check out any time you like, but you can never leave.” And so it is with my roots as well as my parents. We are Richard Russo’s people, with “everyman’s” fragile dreams anchored in “anyplace, USA.” People such as my father who returned from WW II with expectations of a family life depicted in the “Father Knows Best” TV series of the 50’s only to be constantly disappointed. He found his “life” in his work as a commercial photographer where he had respect. Not long after he died at the age of 68 of pancreatic cancer in 1984 I wrote an essay about him, which I append below. 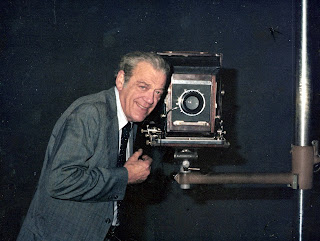 Up Park Avenue we would speed to beat the lights from lower Manhattan in the small Ford station wagon with “Hagelstein Bros., Commercial Photographers since 1866” imprinted on its panels. The Queens Midtown Tunnel awaited us.

It is some summer in the late 1950s and, once again, I’m working for my father after another high school year. In the back of the wagon I share a small space with props, flood lamps, and background curtains. The hot, midtown air, washed by exhaust fumes and the smoke from my father’s perpetual burning cigarette, surround me.

My father’s brother and partner, my Uncle Phil, occupies the passenger’s seat. They have made this round trip, day-in and day-out since my father returned from WWII. Their discussions no longer center on the business, but they speak of the city, its problems, the Russians, and politics. I think of where my friends and I will cruise that evening in one of their cars, a 57’ Merc., probably Queens Blvd., winding up at Jahn’s next to the RKO on Leffert’s Boulevard.

Over the years, as a summer employee, my father believed I was being groomed for the business, the fourth generation to carry it on. My Uncle was a bachelor and I was the only one with the name to follow the tradition. There were cousins, but none at the time had any interest in photography, so the obligation fell to me.

This was such an understood, implicit obligation for my future maturation, that nothing of a formal nature was needed to foster this direction. Simply, it was my job to learn the business from the bottom up, working first as a messenger on the NY City streets, delivering glossies to clients for salesmen’s samples and for the furniture show (the primary commercial product photographed by my father). Then I graduated to photographer’s assistant, adjusting lamp shades under the hot flood lamps so the seams would not show, and, then, finally to an assistant in the color lab, making prints, dodging shadows to hold overexposures of glass tables. Osmosis was to be my mentor.

At work I see my father, as the camera would reveal contrasts with different filters. These were normally invisible to me. At home he was a more contemplative, private person, crushed into submission by a troubled marriage. But I see him strolling down the halls of his business, smiling, extending his hand to a customer, kidding in his usual way, “How’s Biz?” he would say. His office overlooks the reception area and there he, my Uncle, and his two cousins would preside over lunch, a burger and coffee from the nearby luncheonette.

In spite of my obligation to learn the profession from the inside, I inveigled his support to go to college – with the understanding I would study business. By then I think I knew that this would be the first step to take me away from HIS business, a step, once taken, would not be taken back. The question was how to reveal this to him.

But as silently as I was expected to take over the business, my retreat was equally stealth. We both avoided the topic as I went to college and I continued to work there during the summers. Once I switched majors from business to the humanities, we both knew, but still, no discussion. This was territory neither he nor I wanted to visit at the time.

My reasons were clear to me. In the hallways of the studio he was larger than life but he was also provincial in his business thinking. He, his brother, and his cousins had developed an inbred view of the future of photography. Like Willie Loman, they had bet the future of their business on producing prints for salesmen, unconscious to the developing mass media and its impact on door-to-door sales. Entering the business would mean conflict with beliefs that were sacrosanct, a battle I would surely lose. So, I kept my silence and progressively moved away.

Why he never brought up the subject I will, now, never know. Ultimately, I married, and began a career in publishing, with an office, ironically, only three blocks from his studio. I still joined him for lunch occasionally, with his greeting me when I arrived, “So, How’s Biz?”

“Hagelstein Bros., Commercial Photographers since 1866” went into a steady decline over the next two decades, finally vanishing in 1985, soon after my father’s death. That it lasted as long as it did was a testimony to his life and skill as a photographer
Posted by Bob at 9:59 AM